The EDC Conference, Terpsichore and her Sisters, opened new areas of research for early dance

This was an exciting weekend of papers and workshops on a variety of topics linking early, or historical, dance to art, drama, music, comedy, travel and more. The venue was a charming & comfortable Victorian country house near High Wycombe. 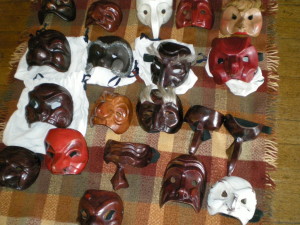 Character masks ready for one of the workshops.

Eminent speakers such as Margaret McGowan, Robert Mullally, Anne Daye and Barbara Segal mingled with young scholars, some of them presenting for the first time. The EDC was honoured to host so many speakers, from the UK and also from abroad: Nira Pullin from the USA, Christine Bayle and Tiziana Leucci from France, and a number of lecturers & researchers from European universities.

From the opening performance, by Jane Turner’s Semaphoreselfies on Calling to the past whilst Waving to the Future,  to a closing workshop on dancing the Charleston, this was a varied and lively programme that managed to be both scholarly and a great deal of fun.

A fuller account will appear in the next EDC Circular and the full Proceedings will be published as soon as possible.

Emma & Mr Knightley Take a Turn around the Dance Floor

Posted On November 8, 2015
To the delight of their audience, at the recent EDC Early Dance Festival, Emma and Mr Knightley revisited Bath to show off their mature…

Posted On February 10, 2020
CALLING ALL DANCE HISTORIANS Proposals are sought on subjects relating to Shakespeare, Early Modern, and/or Renaissance Studies. Any discipline is welcome which intersects with the above…

A hop and step across the Channel: learn to dance a Gavotte and a Menuet with Ricardo Barros